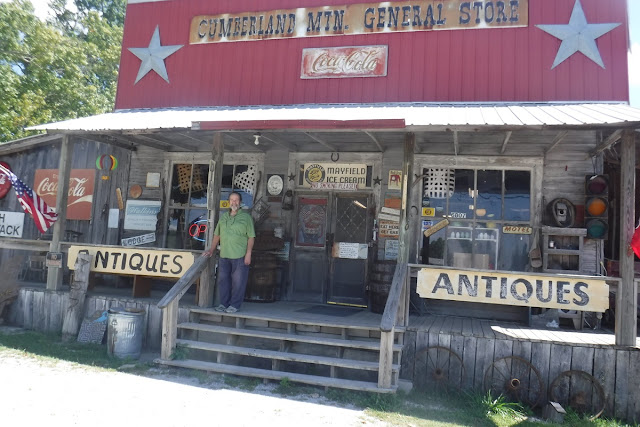 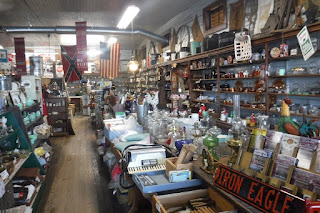 I usually don’t get to pick the places we go out to eat except, perhaps, on my birthday. On this birthday I chose the Cumberland Mountain General Store, or more specifically, their Rockabilly Diner. Except for local traffic the Cumberland Mountain store is not a stop along the way you are going. That is unless you are following the route of the world's longest yard sale but that is another story for another time. 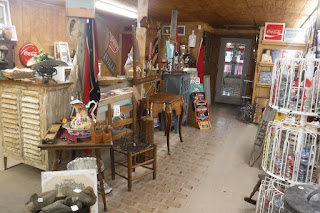 Cumberland Mountain Store and the Rockabilly Dinner are definitely off the beaten track in rural Tennessee. Your question is probably, “Why there?” Since you asked, I am delighted to tell you the backstory and why I have had a curiosity about the Cumberland Mountain Store for many years. I guess it was about 1995 when I went to Florida to meet the prospective in-laws. I had not been in Florida for the previous 38 years so I figured I would have a lot of relearning to do. I must admit that father-in-law Sonny was an education in himself.  One of the things he showed to me was a catalog from the Cumberland General Store. 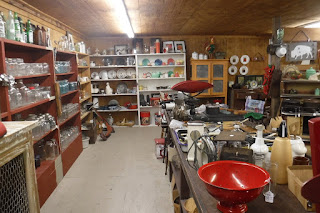 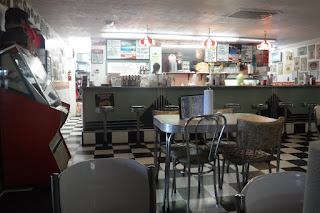 That catalog was fascinating reading much like a vintage 1918 Sears Catalog , you know; men’s dress shirts, $1.18, a horse blanket for $4.50, a 100-pound iron anvil for $13.60 a new oak veneered front door for your house for $6.41 or a pair of men’s fleece-lined cotton socks for 44 cents.  Except for the clothing, the Cumberland Mountain Store sells much of the same merchandise, cast iron stoves, wood-spoked wheels for your mule cart and plows to pull behind your oxen. The only difference is the Sears catalog is an image of the past whereas the Cumberland catalog is for sale today at today’s prices. I know it is not all authentic wares from the past but modern recreations and there may be a delivery delay for material made to order.

Sonny enjoyed reading that catalog. It was like a paleontologist’s catalog of ancient relics. Although the catalog hardly varied from year to year Sonny ordered a new one almost annually. I was happy to take one of his back issues for my own. I have ordered a few items. I have also shared the catalog with my sister and she has ordered a few thing as well from time to time including parts to restore an old family heirloom lamp. Naturally, curiosity about the store increased over the years. Tennessee is rich in the history. The first European explorer was Hernando De Soto and one hundred years later explored by Frenchmen Jacques Marquette and Louis Joliet. And we cannot forget the famous explorations of Daniel Boone. Amore recent historical tie-in is its location on the York Highway named for Alvin C. York the Congressional Medal of Honor recipient during World War I. All of the historical tie-ins made it a place of interest and worthy of a visit. However, doing my research I found out they had added a small burger shop on the back of the store. That settled it. I now had to go to the Cumberland Mountain General Store and try out the burgers at the Rock-A-Billy Diner.

It is a good idea to check their Web Site or call. Things like the weather can significantly change their hours of operation.  After a quick phone call we set out allowing time for the 1 ½ hour trip to arrive a bit before the 11:00 AM diner opening. Most of the journey was along Interstate 40. We exited onto US 127, The Sargent York Highway, near Crossville, headed north and arrived a few minutes later at the Cumberland Mountain Store.


The store had not been open very long; there were few cars in the parking area. That afforded us a leisurely walkthrough the store. We visited the main room and the side annexes. It is an interesting experience walking through the store. It is like a museum where the artifacts are on sale. Quite often there is something you recognize from an earlier era, perhaps styles of dishes or cookware you remember as a child. There are things you can recognize form your parent’s youth; bedside pitchers and basins, kerosene lamps and old flour and sugar sacking grandma used to make clothing. It was a charming sojourn into the past. 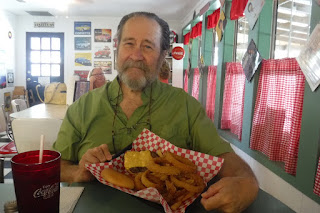 I did not ask anyone at the store but I surmise the following: The store and the catalog are related but the store does not in fact display or sell most of the items listed in the catalog, perhaps operated as distinct businesses. Most of the merchandise offered in the store, with the exception of a few items like flour and sugar sack prints material, is one of a kind, much like the offerings of an antique store. If you are looking for a hands-on look at catalog items you will not find them in the store. That is not to say the browsing isn’t interesting. I found a lovely cut glass ship’s decanter, minus the stopper that I really should have taken. Well, maybe it will still be there the next visit.
Soon it was lunch time and time for a visit to the attached Rock-A-Billy Diner. It was early so we had no problem finding a preferred table. The diner is not a glass and chrome railroad car diner but more akin to an off the side of the road 1950’s era diner with a bit of nostalgia rock and roll décor. As you might expect the menu offers burgers, dogs, malts and the like; it is a soda fountain burger shop geared to the lunch hour. However, something I have yet to try is their Friday Fish Fry and Friday Night Cruise-In. 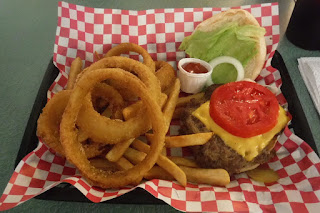 The young ladies tending the fountain and tables were charmingly courteous and quick to serve. One side of the menu features the sandwiches and such while the reverse lists soda fountain treats, malts, sundaes and banana splits if you desire something lighter especially on those hot Tennessee summer days. Janis ordered the 1/3 Pound Old Fashioned Steak Burger Combo (Burger, fries and a drink - $7.95). I or

dered the Rock Basket (that is a 1/3 Pound Steak Cheese Burger Combo with additional Onion Rings, $8.95, plus 50 cents for the cheese).We ordered our drinks from the offered Coca Cola products. The burgers are cooked to order and not sitting on a shelf under a heat lamp. The burgers and fries arrive in a basket with a paper liner much like drive-ins of old. The sandwiches are bare. The usual condiments, lettuce, pickles, tomatoes and the like are at a self-serve station in the dining room – you really can have it your way. The onion rings were real onion rings. They were not the minced onions formed into little circles and then fried. No these were real onions breaded and fried. They had a nice sweet flavor. The French fries were piping hot, a nice golden brown.  A dash of salt and a bit of ketchup was all they needed. When I cook burgers at home I like the a bit pink in the middle. When I am eating out and the source of the meat is unknown I like the burger to be cooked through – but certainly not over cooked. My burger has just cooked through on the griddle, was still nice and juicy and good beef flavor. Had I grilled this burger at home I would have been very happy with it.

The visit to the Cumberland Mountain General Store and the Rock-A-Billy Diner was a positive experience. The retro diner was the major draw that brought us there but the shopping tour of the general store was surely sweet icing on the cake. Tennessee is rich in history and only lightly touched in remote areas by modernization. You can evidence from the earliest days of colonization, the opening of the West and trail-blazers like Daniel Boone, the Civil War and more recent heroes of the Twentieth Century. All you have to do is turn off the Interstate and follow the small roads into the hills. The Cumberland Mountain General Store is part of that. I thoroughly enjoyed my trip back in time and the cheeseburger at the Rock-A-Billy diner. There is much more to the history of the store itself that I have not covered here. I’ll leave that to you to find out on your next trip the General Store.