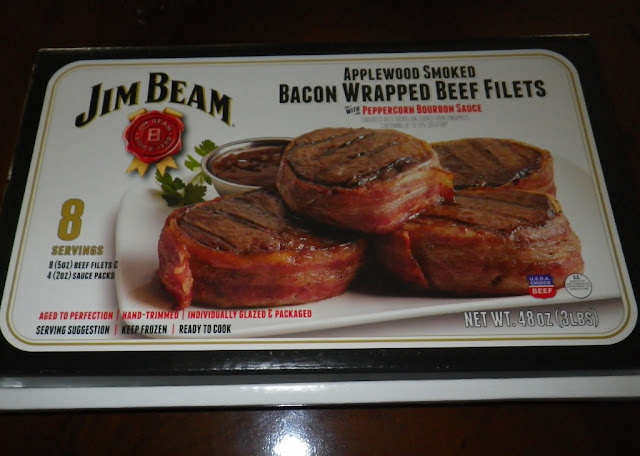 It is an old truism that you should never go grocery shopping when you are hungry. Perhaps I was a little off my feed that day we went shopping at the local Costco. The Jim Beam Applewood Smoked Bacon Wrapped Filets caught my eye.  The box offered eight 5-ounce steaks and four pouches of peppercorn bourbon sauce. The wife and I are not big beef eaters but we like a streak now and then.  That is usually a way-to-big chunk of meat and expensive to boot. At a couple of dollars apiece for a small steak once in a while sounded like a pretty good deal. It didn’t seem logical that a big name company like Jim Beam would lend themselves, at least knowingly, to a bad product so we decided to try a box and see what was inside. 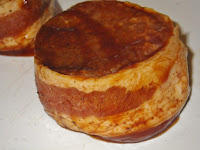 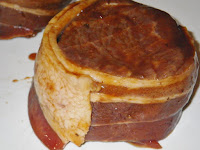 The bacon wrapped steaks are individually wrapped so it is easy to take out what you need for the meal while the rest remain frozen.  It seems one pouch of sauce is intended for two steaks. I thawed the steaks overnight in the refrigerator. An hour or so before cooking I opened the package to set them out to come to room temperature before cooking. I thought I could smell the aroma and feel the texture of papain and/or bromelain, meat tenderizers, in the marinade sauce although I could not find them listed on the packaging label. I warmed the sauce pouch in a bowl of hot water. 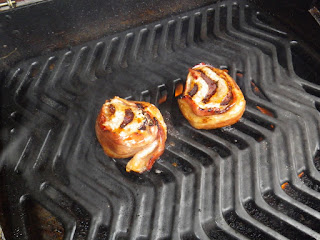 It is a thick piece of meat so a hot grill will burn the outside before the middle heats to the desired temperature. I preheated the grill so the grill would leave the marks but I tuned the gas down to between medium and low before grilling the steaks. There is apparently some sugar or other sweetener in the marinade because the grill marks were dark and distinctive. About four minutes per side gave an inside temperature of 145 degrees (and we all know the mantra, “Cooking times will vary depending on your grill!”) The result was a nicely browned steak with distinctive grill marks and a warm pink interior.


The bacon: That is the only part I had a problem with. I did not have good results with the bacon. It always ended up cooked but it was soft and sort of rubbery.  I like bacon a lot but I prefer my bacon crispy. As a result, I am ambivalent about the bacon wrapping the steaks. It didn’t really add to the flavor of the steak though it may have helped keep it moist. It was not particularly appetizing to me at least when it was done and on the plate. Not to worry though, Chena, our dog, took care of that problem for us. 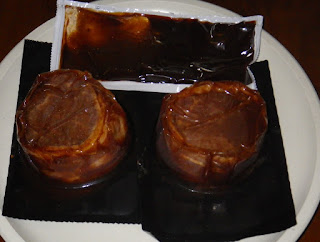 The sauce: I am not usually a sauce fan. After all, all a good steak needs is some smoke from the grill and a sprinkle of salt. It has always seemed to me that if it needs a lot of sauce it wasn’t a good steak to start with. Since this is where the Jim Beam gets into the act, I was eager to at least sample the sauce. I tasted some on my finger and some on a part of the steak. Although it has been many, many years since I have tasted it, the Jim Bean Peppercorn Sauce evoked strong memories of A-1 Steak Sauce.  I’m not sure I could tell the difference between the two in a blind taste test at this moment. I did, however, set some aside for the next time I grill hamburgers. I am anxious to see how it will be as a seasoning condiment for burger patties. I have a hunch it might be pretty good.


The steak: It is not the best steak in the world nor is it the worst. A filet: a piece of meat without any bone. So, here we have a 5-ounce piece of cow but where did it come from. It certainly isn’t Kobe beef, Angus or a filet mignon. It is solid piece of meat without any marbling; a working muscle. Perhaps it is sirloin or similar cut of meat. It does have good flavor but it tends to be a bit on the tough side and a bit chewy.  If you had been served this steak at an upscale steak house you would have been disappointed and maybe even sent it back to the kitchen. And yet it was much better than the steak you would have been served at a chain bargain steak house of some years back that was often the butt of comedian’s jokes. 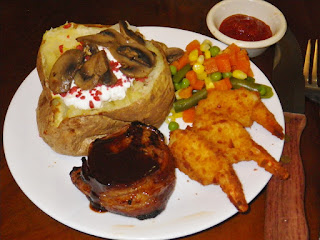 To sum up, a fairly tasty piece of meat, adequate for a meal, albeit it is a bit on the tough side. Perhaps all it really needs is a pinch of salt rather than the steak sauce (unless you are into the steak sauces which then brings it into the realm of personal preference).  The bacon adds a bit of glamor in the name but does little to really enhance the steak. The real strength of this product is the convenience. It is an “okay” steak,  frozen, waiting in your freezer.  In short order you can grill on the gas or charcoal grill or one of the electric parallel plate grills and have a nice looking, tasty meal on short order. Pair it, as we do, with a baked potato, some shrimp for a surf and turf and you have an easy to prepare, full satisfying meal to satisfy your carnivore instincts all in the comfort of your home.