Mamas Kitchen II
5885 Seminiole Blvd
Seminole, FL 33772
(727) 319-4040
Tom and I had been out on a photo-safari. It was nothing exotic; just some pictures of the St. Petersburg pier and the city skyline. It was a warm day and thoughts of refreshments crossed our minds; a cool drink perhaps? Maybe even some lunch! And so it was we went to Mamas II in Seminole, Florida. I first wrote about Mamas II back in December of 2006. I pointed out that, “Mamas Kitchen isn’t what you might at first think. It isn’t Mama like your mother, it is said Ma-mas, the Protector of the Shepherds, based on a medieval Cypriot legend. Mamas is regarded as the Patron Saint of Cyprus and Naxos. The lion of the legend is the logo of the restaurant. The Seminole restaurant is one of three operated by the Saint’s namesake, Mamas Antoniou and his family.”

We arrived a bit after the lunch hour. The parking lot was nearly full and we feared a long wait before being seated. The hostess asked to wait for just the barest moment while a booth was cleared and we were led to our table almost as quickly as we had entered. The waitress was there almost immediately with menus for us and she took our beverage order. Mamas serves Pepsi products so I went with a Mountain Dew and Tom chose coffee. During the course of our stay the waitress would keep our beverage glasses topped off.

Tom chose the turkey club sandwich deluxe, $7.99 (with French fries or a cup of soup). It was the traditional three slices of toasted bread, quartered, with very generous portions of turkey, bacon, tomato and lettuce. The sandwich comes with a small side of coleslaw which was nestled in the ample serving of golden brown and piping hot French fries. We were both hungry and Tom started off at a good clip. By the time he was to the last quarter of his sandwich, he was picking out “the good stuff,” as he called it, and leaving the bread behind. It was a good sandwich, tasty and of sufficient size to satisfy just about any appetite. 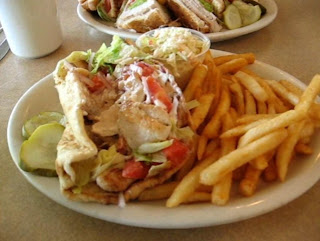 Mamas offers traditional gyros and chicken gyros. I chose the chicken gyro deluxe, $7.29 (with French fries or a cup of soup). It also comes with a small side of coleslaw. The coleslaw was slightly tart, slightly sweet, a good balance, the cabbage crisp and fresh. Without the fries the gyro and the coleslaw would have made an adequate meal. The fries were golden, crisp and hot on arrival to the table. Very tasty, Mamas seasons their fries. I don’t know the mixture but it is a very good flavor combination. If I had a complaint, it would be that the pita bread was so full of chicken that it was necessary to eat it with a knife and fork. And that complaint is really a compliment about the generous size of their servings. There is no skimping. The chicken was tender, well seasoned and cooked just right. The lettuce was crisp and the tomatoes ripe and with some flavor. The tzatziki sauce was a good blend of the yogurt and the cucumber, neither dominated, both were present and complimentary. I considered that I made a good choice for my lunch sandwich.

It was towards the end of their lunch rush. Even in their rush, the serving staff was patient, attentive and displayed a genuine good nature that made us feel welcome. There were always booths available so we felt no urgency to finish and there was no urgency on the part of the staff that we should leave. It was a nice long and leisurely lunch which gave us time to plan our next photo-safari.