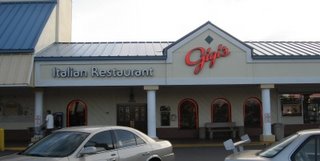 Gigi’s Italian Restaurant - South Pasadena, Florida 11/16/06
Gigi’s is a family owned restaurant that has been handed down through several generations. It first opened its doors in 1967. More modest then at present, it was soon discovered by, among others, the local high school set and its popularity spread rapidly. Many of those who were among the first to "discover" Gigi’s way back then, including my wife, still frequent the familiar and comfortable surroundings. Over the years good food and a good reputation has allowed Gigi’s to expand. It has more than doubled its seating capacity in the original South Pasadena store and it has opened two other venues. One is in Treasure Island and the other in St. Pete Beach.

The lighting is dim, a strived for "candle lit atmosphere" without the need for candles. Even in the dim light one can see a neat, clean and orderly dining room with a low noise level. The center aisle tables have freshly laundered deep-red tablecloths. Although he booths along the walls do not have the tablecloths, they share the red lined napkins with the rest of the restaurant. In the quiet hours you can stroll through the dining room and choose your own table.
The substantial menu features complete dinners ranging in price from 12 to 20 dollars. Fresh seafood from Tampa Bay and the Gulf are also featured. The back page has a nice selection of pizzas and optional toppings. An Early Bird menu, 4 to 6pm, is also featured with a nice selection of entrees , your choice, $7.99. Early Bird specials come with soup or salad and bread.
It was an early dinner so we ordered from the Early Bird menu. My father-in-law ordered manicotti and meatballs, the same thing he always orders when he comes here. The wife ordered the grilled chicken and rice pilaf. My favorite is lasagna and it is also the benchmark I use for comparison on my first visit to a new Italian restaurant.

The salad was ample in quantity. The chosen dressing is served on the side so you can add as you like it. The bed of mixed salad greens was mixed with slices of celery, ripe and green olives, and delicate mandolin-cut rings of red onion. A wedge of tomato and a pepperoncini completed the salad. The lettuce was fresh and crisp. The tomato ripe and firm.
The manicotti and meatballs was, as usual, good and in an unusual display of appetite, my father-in-law completed his meal and there wasn’t any doggie-bag for the dogs. The wife was satisfied with her chicken and rice pilaf. The lasagna was oven baked and after the obligatory warnings about a hot dish, I was able to sample the lasagna. The sauce was savory but not overpowering and rich with meat. The noodles were cooked through and the cheese stuffing tasty. All in all, I would rate it as one of the better lasagnas I have sampled over the years. The entree was served with Italian-style bread, cut in slices, buttered and lightly toasted. It was the perfect accompaniment to the entrees.

The young lady who was our server was polite, efficient and made frequent, unobtrusive stops by the table to access our needs and satisfaction. We never had need to call for her, she was just there when you needed her. She added to the dining pleasure that evening. Gigi’s has been a favorite of my in-laws over the years and after my initial visit, I believe it will become one of my favorites too.  ¶ 5:35 PM 0 Comments

Sunday, November 05, 2006
IHOPs Across the Nation One of the advantages of eating at "brand familiar" restaurants is consistency. You pretty well know what to expect. Although we often seek out new and different foods and flavors, we frequently go where you already know what is on the menu. On such place is IHOP, the International House of Pancakes. So, this blog will be different in that I will explain what I expect from an IHOP and then amend it over time as I add each IHOP I try and tell how they match up to my ideal of a house of pancakes.

My first remembrance of an International House of Pancakes is from the mid 1950s. It was a new addition in Panorama city in the beginnings of the San Fernando Valley building boom. It was a Sunday treat to go there with Dad for a giant stack of pancakes. It was a tradition that I continued with my own children and they enjoyed going out for a pancake breakfast. It was an economical eat-out treat. I remember there were all kinds of syrups from which to choose. Perhaps a peculiarity or quirk of memory, but I seem to remember that every thing in the restaurant felt sticky with syrup. You could see the waitresses wipe the tables and furnishings with their cloths but the Naugahide seat covers and the especially the menu always felt tacky. I haven’t encountered sticky IHOPs in later years and it makes me wonder sometimes about my memory.

So, what do I expect from an International House of Pancakes? I expect it to be clean and not sticky (that memory thing, again). After all these years, IHOP has to have to have the griddle temperature and the cooking time down pat. I expect the pancakes to be GBD, golden brown and delicious, cooked and golden on the outside and not raw and doughy on the inside. I expect the syrup dispensers to be full, the coffee hot and the carafe kept full. I expect sides for my pancakes to be cooked to order, the eggs cooked through without being crispy, the bacon crisp and not greasy, and all of it served in an attractive and pleasing manner. In short, the same thing you would expect from an IHOP and what you are probably pretty sure you are going to get anyway.

I have of recent had the opportunity to sample IHOPs in two very different locations. The first, on two occasions, near where I live in Alaska. This particular IHOP is within the parking lot of the Home Depot. That makes it very convenient to grab a bite to eat after a long day of shopping for home project materials. Once we made a late afternoon trip into town for materials and sampled the dinner menu. I tried the fried shrimp. The portions were adequate and tasty though it was not the best fried shrimp I have ever eaten. The presentation attractive and the service staff efficient and courteous. It was what I expected and it was what I received.
Some months later, on an early trip into the big town, we had brunch at the IHOP and chose from the breakfast menu. There had been several commercial spots on TV featuring the stuffed French toast and the wife was anxious to try them. For breakfast I usually go for the eggs, hash browns, bacon and toast. Both dishes were served in a prompt and courtious manner. The plates were attractive and the taste was good and the portions adequate. Again, it was expected and it was what was delivered.

It is retirement time and we are on the road. We met up with some old family friends for breakfast. Yep! You guessed it. We went to the IHOP. Only this one is in Pigeon Gorge, Tennessee. It is just a block or two from Dollywood. It looks, smells and feels like an IHOP with one exception. In keeping with the touristy and commercial character that has beset the once quiet community, the entrance and exit from the restaurant is through their little gift shop where you can but trinkets to celebrate your visit to Pigeon Forge and Gatlinberg (great shades of Tennessee Tuxedo). There are even a few items that are IHOP specific. Other than the gft shop vestibule, the remainder of the restaurant is strictly IHOP. It has the same coffee carafes, the same syrup pitchers and basically the same menu. We all ordered different items form the menu and ran the gamut from eggs and bacon to strawberry and banana pancakes.

It was a reunion and the talk was fast and the questions many. The food disappeared in a flash and there were no complaints. I didn’t, as I usually do with guests, ask for a critique of the food but I sensed that they were satisfied and they had, just as we did, received what we expected, all in a timely manner and by a courteous serving staff, and the table wasn’t sticky.

It has been my experience that IHOP is consistent from restaurant to restaurant and the food quality is good, and the service usually very good. If you are in the mood and an IHOP is near, I suggest you satisfy your craving for some pancakes. I don’t think you will be disappointed.  ¶ 8:34 PM 0 Comments