That Food Guy
Saturday, September 19, 2009
King Asian Buffet - Frontier Mall Wasilla, Alaska
My first encounter with the King Asian Buffet was last year. Then it was my understanding that Shine’s, a small store-front sushi and order-from-the-menu Japanese themed restaurant, had expanded and taken over the previous operation. Last summer we made an exploratory visit to the Shine’s new facility in Wasilla. We were pleased enough that we returned several times during that summer, always pleased with the offerings. 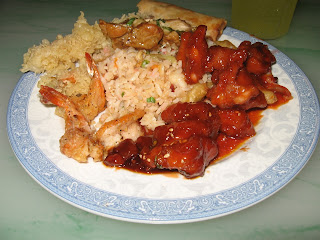 Shine’s Wasilla is larger than the Eagle River restaurant, large enough that they have a walk around, serve yourself, all you can eat bar. One section has self-serve sushi featuring many of the most commonly ordered items. Small amounts were offered at a time, frequently renewed, and the selections looked and tasted fresh. There were a large number of hot item in a fusion of Japanese, Chinese and Thai dishes as well. Over all the food offered appeared to be a cut above the usual all-you-can-eat Chinese buffets. Also included in the hot food section was Shine’s signature tempura shrimp, a definite plus. An adjacent wall serving table was covered with many dessert items including fruit, puddings, Jell-O, cakes and cookies. The dining area is well lit and uncrowded, the staff quick to greet, bring beverages and keep the cleared of used plates and provide clean plates for second helpings.
Last year’s visits were pleasing experiences, enough so that the twenty mile drive did not seem to be unwarranted. The food was very good and of high quality, the service excellent. The twenty mile drive to revisit King Asian Buffet this year, however, was a bit excessive for the quality of the food offered. Last year the buffet food was near the quality of order-from-the-menu fare. This year the food is of the same class as most other all you can eat Chinese buffets. Also missing were the Shine’s tempura shrimp.
do not know if Shine’s is still the owner and operator or if they have just modified their offerings and focus. The present menu offers a large selection of order-from-the-menu items including sushi, Chinese dishes, and confusing to me, a selection of Shine’ Dinners, featuring teriyaki and tempura dishes ranging in price from $10 to $16. I must admit that I have not sampled the menu offerings, though I might sometime in the future. An interesting item on the take-home-to-go menu is all-you-can-eat to go sold by the pound. Seafood limited, lunch $5.29 and dinner $5.99. Seniors and military with ID are offered a 10% discount.
Although this year’s visit found the food to be of lesser quality than previous visits, the staff was attentive and catered without being obtrusive. Although a meal at King doesn’t warrant a long drive, were I passing by on other errands about lunch time, I would consider stopping by for typical all-you-can-eat Chinese food buffet food.
¶ 11:52 AM 3 Comments 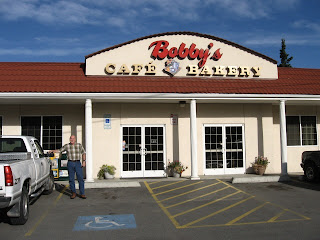 The communities of Chugiak and Peters Creek are geographical areas rather than centralized towns. Scattered at various crossroads, there are place to get some basic groceries, gas and even rent a video. What is unique about the rural area of Chugiak and Peters Creek is that there are a couple of places to get good food to eat in a sit down restaurant or cafe. One of these is Bobby’s Café.
Bobby’s has been around for a couple of years. When it was being built one wondered about the wisdom of building a small café right next door to the larger and long established Bella Vista Italian Restaurant. As it turns out, they are not competitors but complement one another. The Bella Vista is open for afternoon and evening dining while Bobby’s is open for breakfast and lunch, Monday thru Sunday, 8 AM to 4 PM. The building is clean and good repair. The dining room is light and airy with lots of windows. Seating is mainly tables and chairs that are sturdy enough to rest your elbows on.
The luncheon menu features salads, hamburgers, specialty and cold sandwiches, and patters of chicken strips or shrimp. I shall go back one day to sample these offerings but today’s visit was for breakfast. The menu offers eggs and omelets, pancakes, waffles and French toast. There is also a children’s menu section. Prices are what one would expect in rural Alaska but not too far away from Anchorage. 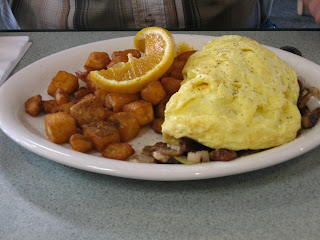 My host opted for the chef’s combo omelet. A three-egg folded omelet it was filled to capacity with the sausage, bacon, onions and mushrooms. The dish is served with home fries, toast and jelly. In presentation the omelet looked well cooked but not overdone. My host described it as being very tasty and a good combination of flavors and seasonings. Being that he usually leaves something on his plate, today’s empty plate spoke well for the meal. 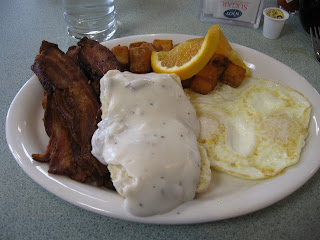 I selected the farmer’s breakfast consisting of two eggs, home fries, bacon or sausage and a biscuit and gravy. I opted for the bacon well done and asked for the eggs over medium. In a busy kitchen on a hot griddle over easy and over medium are but a few seconds apart. My eggs were closer to over easy and I would have preferred them cooked a bit longer. The home fries are little cubes of e potatoes that were a bit crispy, nicely browned and very flavorful. I like them, they were good. The platter came with four slices of thick cut bacon cooked well done to just crispy, a good call by the cook. The biscuit was layered and flaky, the gravy was smooth, had flavor but not as much spicy sausage flavor as I have come to expect after sojourns to the south. Aside from the eggs that I wish had been cooked a bit longer, and the gravy I would have like with bit more spice, I found that the food was well prepared and of good quality and of adequate proportions.
Our waitress was at the table as we seated ourselves and brought us our coffee, water and the menus right off. The order was cooked in a timely manner. During the meal our waitress as well as other dining room staff would ask how we liked the food and if we wanted refills for our coffee. I would rate the staff as attentive to our needs and wishes, quick with service when needed, polite and courteous to the patrons. Just as important, they were never pushy to clear the table when the meal was over, just offers for more coffee. Our overall impression was one satisfaction. To my friends and associates I will recommend Bobby’s for a nice leisurely meal.