﻿﻿﻿﻿﻿﻿﻿﻿
When used properly the modern pressure cooker is a safe and efficient means of cooking your food. Be sure to read your instruction manual thoroughly so that you can use your pressure cooker in a safe and prescribed manner. The very nice feature of the pressure cooker is that you can use less-expensive cuts of meat to make delicious and savory meals. Cuts of meat like seven bone roasts are an excellent choice for this kind of meal. However, after searching through three supermarkets, we could not find a seven bone roast. It is just one of those things that we frequently find that what you want is not immediately available. We still had a desire to have a pot roast so we selected an alternative cut of meat. In this case it was a London broil which is nothing more than a very thick cut of round steak.

We used a little salt and pepper, onion powder, paprika and a sprinkle of MSG to season to meat and then browned it on both sides over medium high heat in a little bit of olive oil. We then emptied a package of dry onion soup mix over the top of the meat. To have enough water to make adequate steam we added 2 cups of water and a bay leaf. We covered the cooker and locked the lid in place, heating over high heat until the rocker began to jiggle. We reduced the heat to maintain a slow, rhythmic rocking and cooked for 15 minutes. Then we placed the cooker in the sink and cooled it under running water.

While the meat was cooking we prepared the vegetables. We peeled and quartered six potatoes peeled and cut six carrots into 1 inch pieces trimmed in stringed six stalks of celery and cut them into 1 inch pieces, peeled 10 Pearl onions. After the cooker was cooled, we opened it and added a can of condensed cream of mushroom soup, one additional cup of water and the vegetables. We recovered the cooker and locked the lid in place and heated over high heat until the rocker jiggled. We reduced heat to just maintain the rhythmic jiggle and cooked for 3 minutes. Again, we went directly to the sink and cooled the cooker under running water.

When the cooker had cooled enough to open we removed the meat and vegetables leaving the juices behind. WE put the uncovered pot back on the stove over medium high heat. We made a slurry of 2 tablespoons of flour and a bit of cold water and added it to the cooking juices. We heated the mixture, constantly stirring, until the broth thickened to a nice consistency. We also added a tablespoon of Kitchen Bouquet®. It all made for delicious gravy. 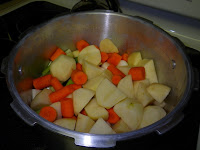 The vegetables were tender, had vibrant color and were delicious. The meat was very tender, the strands of meat falling away to the lightest touch of the fork. It was a delicious meal lasted us a couple of days. Although it sounds complicated with a lot of steps, the preparation of the meal took way less than an hour and gave is a pot roast it was as good as one prepared on the stovetop over the course of several hours. We were very happy with our first meal prepared in the new pressure cooker. I’m thumbing through the cookbook now wondering what we’ll make next… 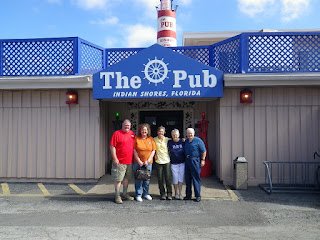 
Our first visit to the Pub was almost by accident. We were taking my wife’s Uncle Gil and Aunt Effie out to lunch at another well-known restaurant. We ran afoul of all of the small towns setting their own street numbers. As a result, we were headed the wrong direction when we passed the Pub. Gil and Effie had enjoyed a prior visit so we decided to stop there. The blog for that earlier visit, November 2010, can be found at http://thatfoodguy.blogspot.com/2010_11_01_archive.html

This visit to The Pub was on purpose. Gil and Effie’s son, Ken, and his wife, Tracy, had read the first blog and were captivated with the view from our table overlooking the inland waterway. A visit to The Pub for lunch was on top of their list of things to do on their next trip to St Petersburg from their home in Northern Georgia. Their visit over the Thanksgiving holiday presented the perfect opportunity. 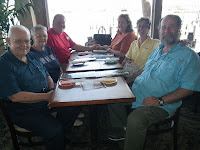 It is sometimes amusing, the foibles of the human memory. After out almost getting lost the last time, when we arrived at the intersection of Ulmerton Rd with Gulf Blvd we just knew The Pub was to the right. We had just about run out of barrier islands before we realized that we had turned the wrong way. We turned about and retraced our route, passing the Ulmerton intersection, going way farther south and arriving at long last at The Pub. I think we’ll remember for the next time.

It was a warm, clear day; the sky an almost iridescent blue. The parking lot was about half full. For a moment we worried about finding a table. Not to worry, as they say. Most of the diners already there had opted for the open air patios taking advantage of the very pleasant weather. Almost immediately we were shown to a table, almost the very one featured in the last blog. The tint of the window gave relief from the brightness of the noonday sun.

Our young and personable server, Kelsey, was quickly there with menus and took our beverage orders. It took a while to decide what to have. There are many good things on the menu. After reading the menu, sipping our drinks, we were finally able to decide what to have for lunch. We gave Kelsey our order and sent back to wait. Out of the window, we could see the daily activities taking place on the Gulf Intracoastal Waterway. There were some very nice pleasure boat and some working fishing boats plying the waters in front of us. One of the highlights of watching out the window was to see a dolphin swimming nearby. 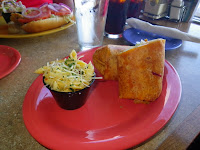 Tracy Ordered A Florida Wrap (Smoked Turkey, Ham, Bacon, Lettuce, Tomato And 1000 Island Dressing In A Tortilla Wrap $9.95). Sandwiches Come With Your Choice Of Pasta Salad, French Fries Or Coleslaw. Tracy Chose The Pasta Salad. It Is A Big Tortilla Wrap. The Tortilla Is Generously Stopped With The Fillings. Tracy Said It Was Very Good And That She Would Consider Having It Again On A Second Visit To The Pub. 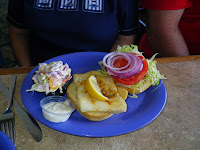 Effie He Ordered The Fish Sandwich. She Ordered The Same Meal That She Ordered On Our Last Visit To The Pub. (Always popular: broiled or fried $9.95) Again, the Sandwich comes with a choice of pasta salad, French fries or coleslaw. Effie he chose broiled fish and the pasta salad. It was a nicely browned ample portion of fish with a wedge of lemon. It was served with a toasted bun, a nice selection of fresh lettuce, tomato, and sliced red onion. There was a portion of tartar sauce on the side. Effie said the sandwich was very good and that the broiled fish is the best choice. Usually a light eater, she was the able to eat and enjoy all of her sandwich. 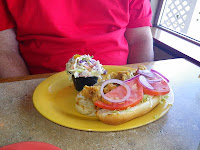 Ken ordered the Oyster Poor Boy (down-home good! $10.49) the Sandwich comes with a choice of pasta salad, French fries or coleslaw. Ken’s selected the coleslaw. About a half dozen large battered and deep-fried oysters are served on a hoagie roll with this, sliced tomato, and some sliced red onion. Ken ate his sandwich with gusto. He said it was very good, very tasty. 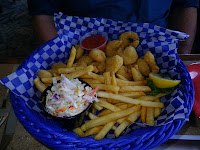 Janis and her uncle Gil the shrimp basket (all baskets are hand breaded and come with French fries at hand coleslaw with plenty of tartar sauce and lemon. The shrimp baskets are $12.50 ) the meal is served in a wicker basket. It consisted of about 15 pieces of breaded fried shrimp, a generous serving of French fries, coleslaw, a lemon wedge and a portion of cocktail sauce. Both Janis and Gil enjoy their meal very much. They finished their order and said it was very good. 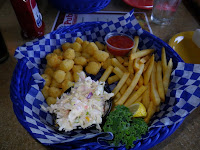 I ordered the Scallops Basket (all baskets are hand breaded and come with French fries and coleslaw with plenty of tartar sauce and lemon. The scallops basket costs $12.95) the order comes with about 30 small breaded and fried scallops, a generous serving of French fries, a side of coleslaw a slice of lemon and a portion of cocktail sauce. The coleslaw were crispy fresh cabbage with a tangy sweet dressing not to wet not to dry. It made a nice accompaniment for the scallops. The French fries were cooked a nice golden brown, were piping hot and delicious. The scallops were nicely cooked a nice golden brown. They were not overcooked and still had good texture the betting was light so you could taste scallops and not just fried dough. I was very satisfied with meal. It was served hot and was of ample proportion to satisfy my appetite. I definitely would consider ordering this dish again should I have the pleasure of dining at the pub in the future.

Overall, the restaurant was neat and clean, the service was courteous and quick, and it was a pleasure to be able to look out over the Intracoastal Waterway while we waited for our order to be served. Had I been dining alone, I would have found the food delicious and worthy of another visit. The fact that we were dining with family made it an even more special event and added to the enjoyment of the day. 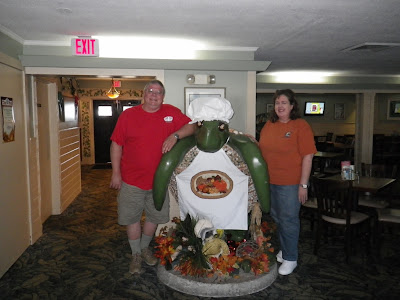