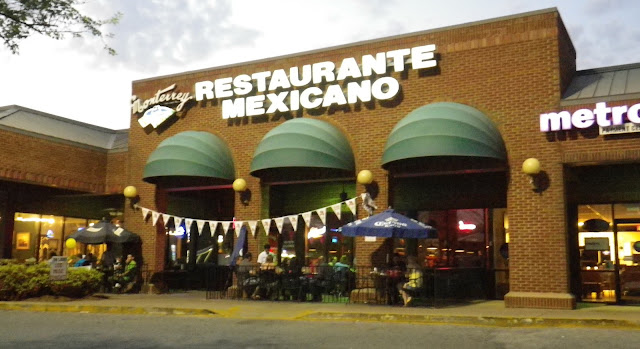 9425 Hwy 92 Woodstock GA 30188 - (770) 924-1007
One would not normally seek out Southwestern-style food in Woodstock, Georgia. Yet here, on Highway 92, there is The Monterey Restaurante Mexicano. We were visiting the wife’s cousins and we all went out for Mexican; it would seem that the Monterey is the usual when the urge strikes.  From the logo and a cursory internet search this store is part of a chain of about eighty restaurants owned and operated by the Raul Leon family, a growing enterprise since the 1970’s serving Georgia, North and South Carolina, Virginia, Kentucky and Tennessee. If I am wrong about this please let me know so I can correct this entry.
Here would be a good place to further explain my judging process and criteria. I do not judge the food against an established fixed absolute standard. To do so I think is a bit snobbish; rather what I do is judge on what I would expect from the restaurant serving the food. For example, I would compare McDonalds, Wendy’s and Burger King against one another and find that they were all pretty good for fast food restaurants. But those same hamburgers would not rate very well at all if I were to be served on in a Red Robin Gourmet Hamburger Restaurant. I expect so much more of Red Robin than I do from the others. That brings us to Monterey, a restaurant, part of a large chain that serves Southwestern-style food. Most of the food is pre-prepared and more of a heat and serve rather than chef prepared at the time of order.  The dishes will have similar trimmings, Mexican rice and refried beans on the side and the entrée well slathered in a sauce. Pretty much the food from one restaurant will be indistinguishable from the food served at another restaurant; we know what to expect and we can judge accordingly.
So, then the question is how does Monterey compare top other popular Southwestern and Mexican-style food bistros? Quite well, actually; considering service, serving time, presentation and the taste of the food it is as good as one would expect from a similar restaurant.  The maître d' greeted us at the door and we were quickly directed to our table (our cousin’s two sons had preceded us and had already taken a table).  Chips and salsa were already on the table. As soon as we were seated the waiter was there to take our beverage order; no waiting there.  The chips were warm and the baskets exchanged for full ones almost without having to call for a waiter. The salsa had a bit of a kick. It was more of a sauce rather than a chunky salsa like a popular bottled brand.
The menu is extensive offering a large variety of Southwestern-style dishes featuring beef, chicken and seafood. A patron can order ala carte, vegetarian, from a child’s menu or one of the combination dinners. There is even a section of smaller serving, lower priced items on a luncheon menu. A very popular southwestern entrée is fajitas. The menu features a large section devoted to the fajita. Although we didn’t sample them this time I look forward to trying their offering of fajitas on the next trip through Woodstock. 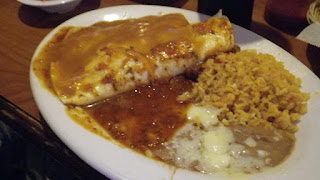 The wife ordered a combination dinner, number 25; (One burrito, one enchilada with beans and rice, $7.99) The meal was served on a large platter plate, the entrees sharing about half the plate with the rice and beans. The burrito and the enchilada were well covered with a sauce, enough so that it was hard to tell what was underneath the sauce. The beans were of a very soft texture with some melted cheese on top. The rice was a bit different from most in that it was yellow-colored or saffron-style rice instead of the more common red rice one would expect. The wife said the rice was rice and the refried beans were just refried beans. They were not bad, there was just nothing exceptional about them.  She said the burrito and the enchilada were good tasting but it was necessary to push away the sauce to be able to taste them; the sauce being somewhat strong and of a slightly different flavor. 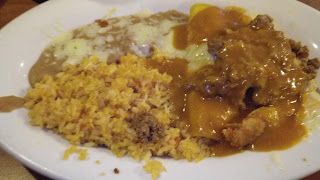 I also ordered from the combination menu, a number 8; (One enchilada, one tamale, rice and beans; $7.95) Also served on a large oval platter plate, the entrée sharing the plate with the rice and beans.  The beans were of a soft consistency with some melted white cheese on top. The taste of the beans was basic, nothing special. The cheese added little and I was unable to appreciate whether the cheese was a hoops cheese or perhaps a jack cheese. Again, the rice was yellow. It was cooked adequately with a good rice texture but I hardly tell it form cooked white rice. The enchilada and the tamale were covered with a brown sauce with cooked ground meat; a bit different than the typical presentation photo on the menu. Although the sauce was a good accompaniment for the tamale it was a distraction from the enchilada and I can only guess it was a basic cheese enchilada.  I could taste the masa in the tamale but I am not sure of the filling. All in all, the meal was filling, adequate but certainly nothing exceptional; on a par with what one would expect from a popular chain restaurant serving Southwestern-style food.
Not but two table away behind where I was sitting there was  a troubadour, a one-man band so to speak, with a guitar, a synthesizer  and a big amplifier. He had a pleasant enough singing voice but more noticeably he was loud. Dinner was a session of trying to read lips in order to have a dinner table conversation. For me personally that pretty much placed a pall over the evening’s meal. The people sitting at the table behind me were caught up in the performances and were happy clap-along, sing-along to the performance.  The restaurant is divide by a glass panel wall the nearly bisects the dining room. I would have been much happier over there, the music performance muted by the glass wall. Or better yet, the tables out in front of the restaurant would have been a perfect place to partake of our meal in the warm Georgia evening.
What does set this particular restaurant apart is the service. In a word, exceptional; the moment you walk in you are greeted, escorted to your table and seated. Only moments elapse before you are given menus and your beverage order taken. The waiter returned in an appropriate time to take our dinner order and offer refills. The meals arrive soon after.  I did notice on e of the waiters was the specialist in delivering the hot platters to the tables. He had a patchwork of oven mitts and cloths to protect his arms from the hot platters stacked nearly to his chin. He made the deliveries frequently even to the outside patio, someone racing to open the doors just in time. That was a unique show. When the wife wanted a take-home container I flagged a waiter from a different station. He returned in a moment with the requested container. The waiters all worked together from delivering the sizzling hot platters to bringing trivial items requested by the patrons no matter at whose table they were seated.  I came away feeling well cared for and pampered.
The big question is would I go back to The Monterey? I will have to say yes, the next time I am in Woodstock. As I stated, the food was as one would expect, good but not exceptional. The service was exceptional. Next time, however, I’ll  ask  for a table in the outdoor patio and I’ll seriously consider the offerings of the fajita menu.