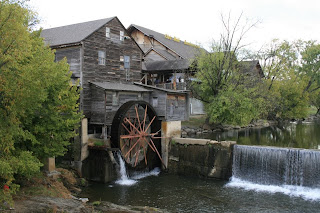 The flowing streams of the Smoky Mountains have been powering mills for hundreds of years. The old mill in Pigeon Forge, along the Little Pigeon River , has been in constant use since it was built in 1830. Today the mill grinds corn, wheat, rye and buckwheat. Some of the bags of flour and grits are indeed for the tourist trade, however, some of the mill products are used in the preparation of the adjacent Old Mill Restaurant’s menu selections.

By stairs or elevator, you go up one floor to visit the restaurant’s main floor with additional dining room seating another floor up . When entering, the open, immaculate kitchen is immediately apparent. The staff is busily at work preparing meals. Huge, rough hewn timbers brace the building and give a rustic appearance to the restaurant, a Smoky Mountain charm. Dining room windows overlook the Little Pigeon River, the dam and millrace of the mill.

A party of five, we were able to sample a variety of the restaurant’s offerings. While we scanned the menu, we sampled the fritters served with ample portions of creamy whipped butter. Presumably made with wheat flour ground in the old mill, they were fried crispy brown and quite delicious without being oily. When the basket ran low, it was quickly replaced by the food server.

Most of the dinner selections include a salad and the restaurant’s signature corn chowder. The salad is a small plate of mixed green and cherry tomatoes. Dressing is served on the side so you can add as much as you like. The corn chowder is quite good. The broth, rich with chicken broth and cream, carried the corn, onion and sweet peppers well. Were I to be making this dish at home, I would probably omit the crumbled oyster crackers. I wasn’t fond of the mouth-feel of wet bread along side the texture of the corn and potatoes.

One of our party selected the Southern Fried Catfish. The large, golden brown fried filets were served with coleslaw and a side of French fries. She said the fish filets were prepared well, the batter crispy over tender fish inside and the filets had good flavor. The coleslaw was made with crisp cabbage and the dressing was light, flavorful but not overpowering to the cabbage. She was satisfied with her meal.

It was a night out for dinner and perhaps a bit of splurging. One of us ordered prime rib, medium-rare. It was a half-pound serving of prime rib cooked to order. The meat was tender and moist, juicy with additional juice served on the side. As with all of the dinner meals, the entree is served alone on its platter. The potato and vegetable side dishes are served family-style, from a serving bowl placed on the table. Mashed potatoes as well as French fries are offered as well as the signature green beans. 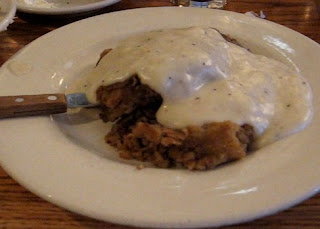 Two of us ordered the chicken fried steak. Two large cuts of meat with a savory white gravy nearly filled the plate. The cube steaks were lean without any gristle often found in processed steak. The breading coated well and was well seasoned and it complimented the mild flavor of the meat. All of the meals were very ample in portion. Most of the diners had to take some home, unable to finish it at the restaurant. Large servings of good food is always a plus.
The meals come with dessert. I selected the pecan pie. A bit different than most, it feature chopped nuts rather than the pecan halves you usually see. It was a good honest pecan pie . It was sweet and the filling was very tasty.
We had a good time chatting over the meal. Drinks and food were served in a timely manner and the serving staff were always busy but never too busy to stop by and deliver a refill soft drink or to ask if there was anything else that we required.
Featuring breakfast, lunch and dinner menus, lots of rustic charm and (lots of) good food with dinner entrees costing 14 to 20 dollars, The Old Mill Restaurant ranks high on out list of places to revisit for a good meal.
¶ 5:02 PM 0 Comments