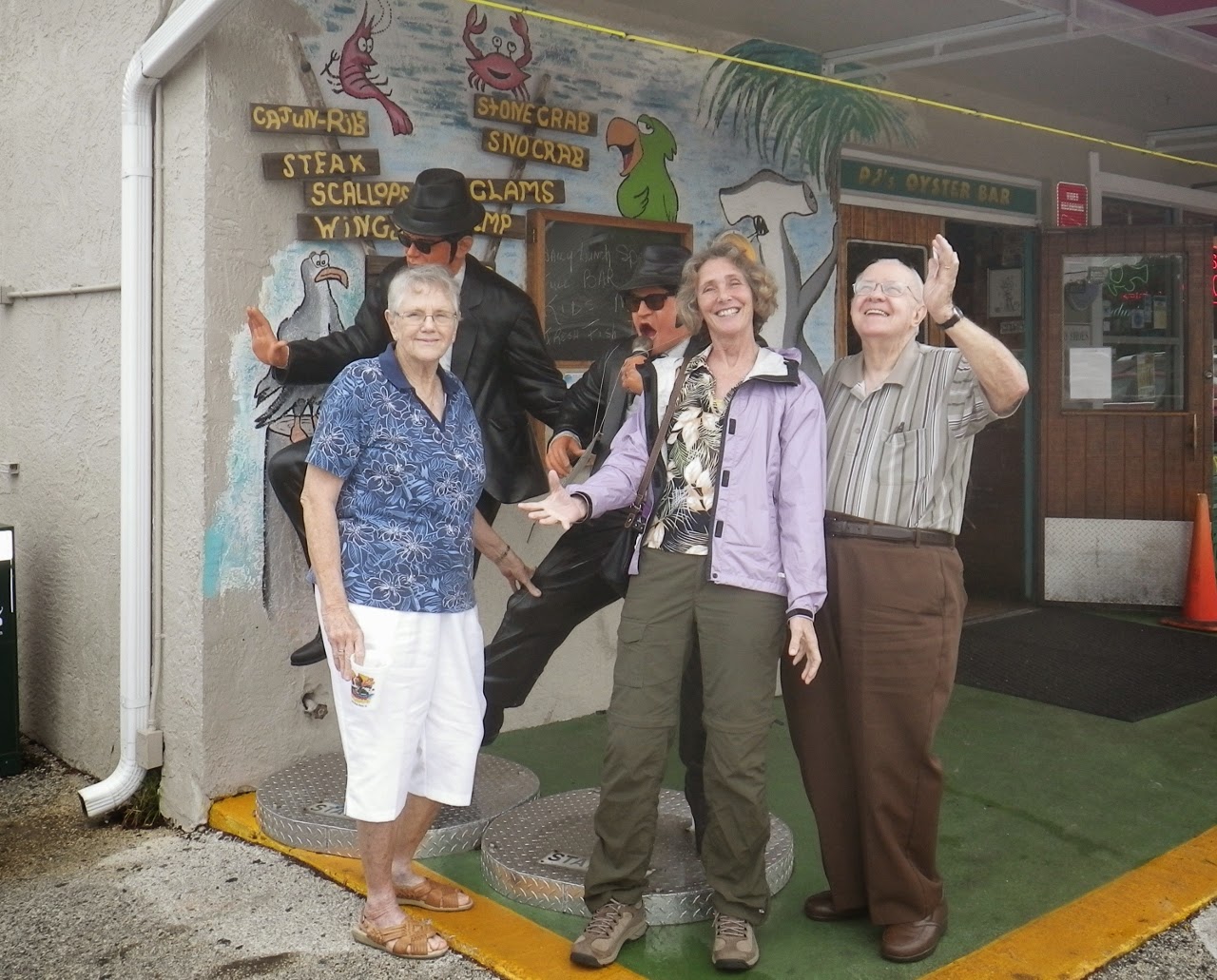 My wife’s Aunt Effie and Uncle Gil needed a bit of help with their computer. A promise of lunch out in exchange was a tempting offer I could not refuse. On a rainy, blustery late morning we went to work on a computer. It was a simple task really, downloading and installing software which was well within their capabilities. It was more just insure that if something went wrong there wouldn’t be a long delay in getting help. All went as it should have (well, maybe one little snag) and a little after the noon hour we started off for PJ’s Oyster bar and Seafood Restaurant. By the time we arrived it was still cloudy and overcast but the rain had stopped. 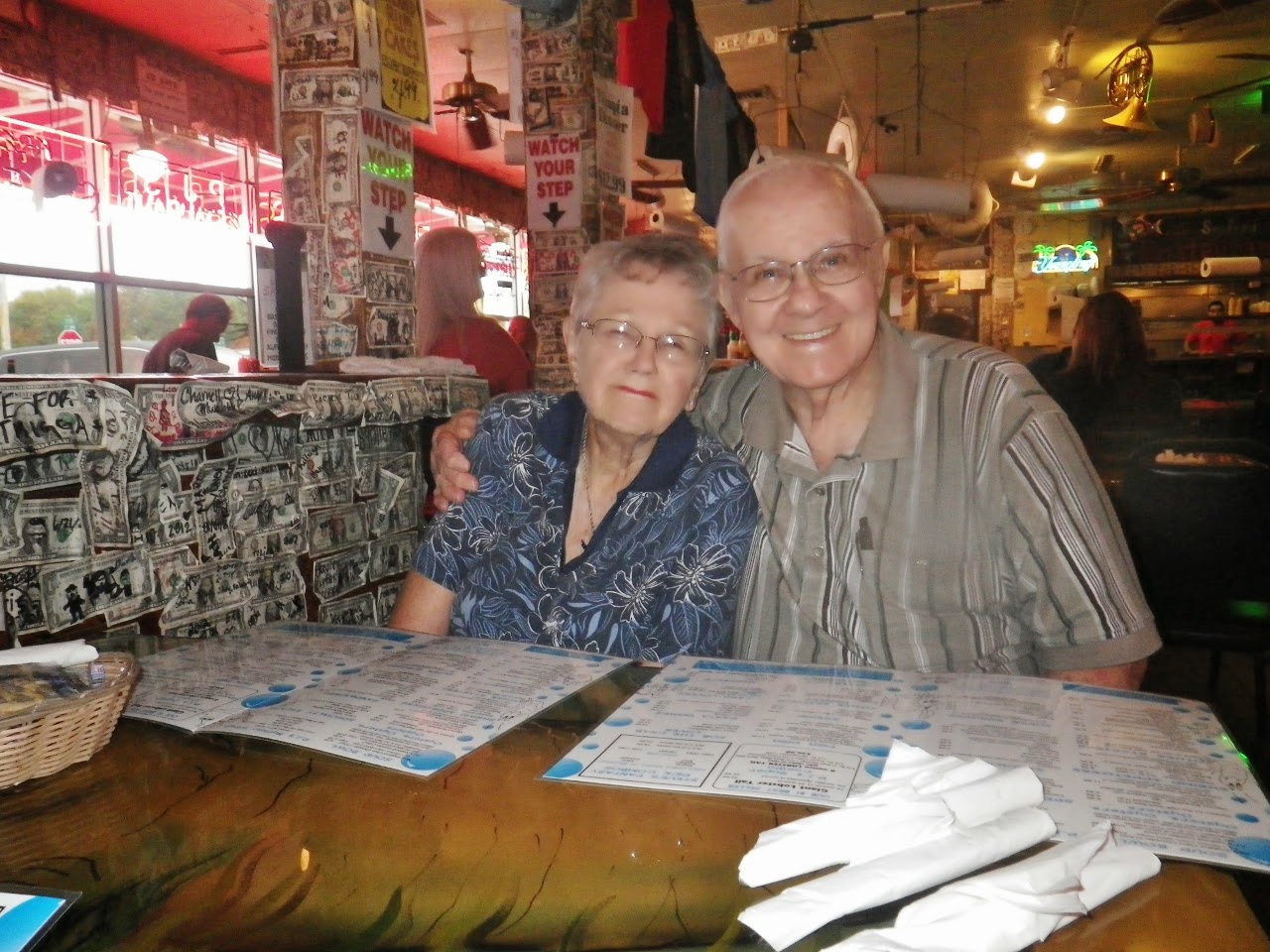 The building has been there a long time. It is small, tired, faded and worn but in reasonable repair. Inside the décor is what you might call eclectic. There is a collection of items, some seacoast related and some not, hanging from the ceiling. Perhaps PJ’s is best known for the dollar bills that adorn just about every available wall space. On request a server will bring you a felt pen and staple gun to add your autographed dollar bill to the collection. After about 35 years in this location PJ’s is moving to a newer building almost directly across the street. When the move comes the dollar bill collection will be removed and the money donated to a local charity. Patrons can jot down their guess as to how many bills there are on the back of their receipts and place them in a jar at the exit. The three closest will be awarded a substantial gift certificate.

A blurb on their menu states that when they opened their door for business in 1985 their intent was to provide a family atmosphere, good food at reasonable prices. We were about to test how well they succeeded in their resolve. The small parking area in front of the restaurant was full and there were several cars in the overflow parking across the street. It promised to be busy inside. The interior is roomier than it would appear from outside. We were shown almost immediately to a table in the center of the restaurant next to a pony wall that divides the dining room in half lengthwise. From there we had a vantage point to see the entire restaurant.  Menus quickly arrived and beverage orders taken. 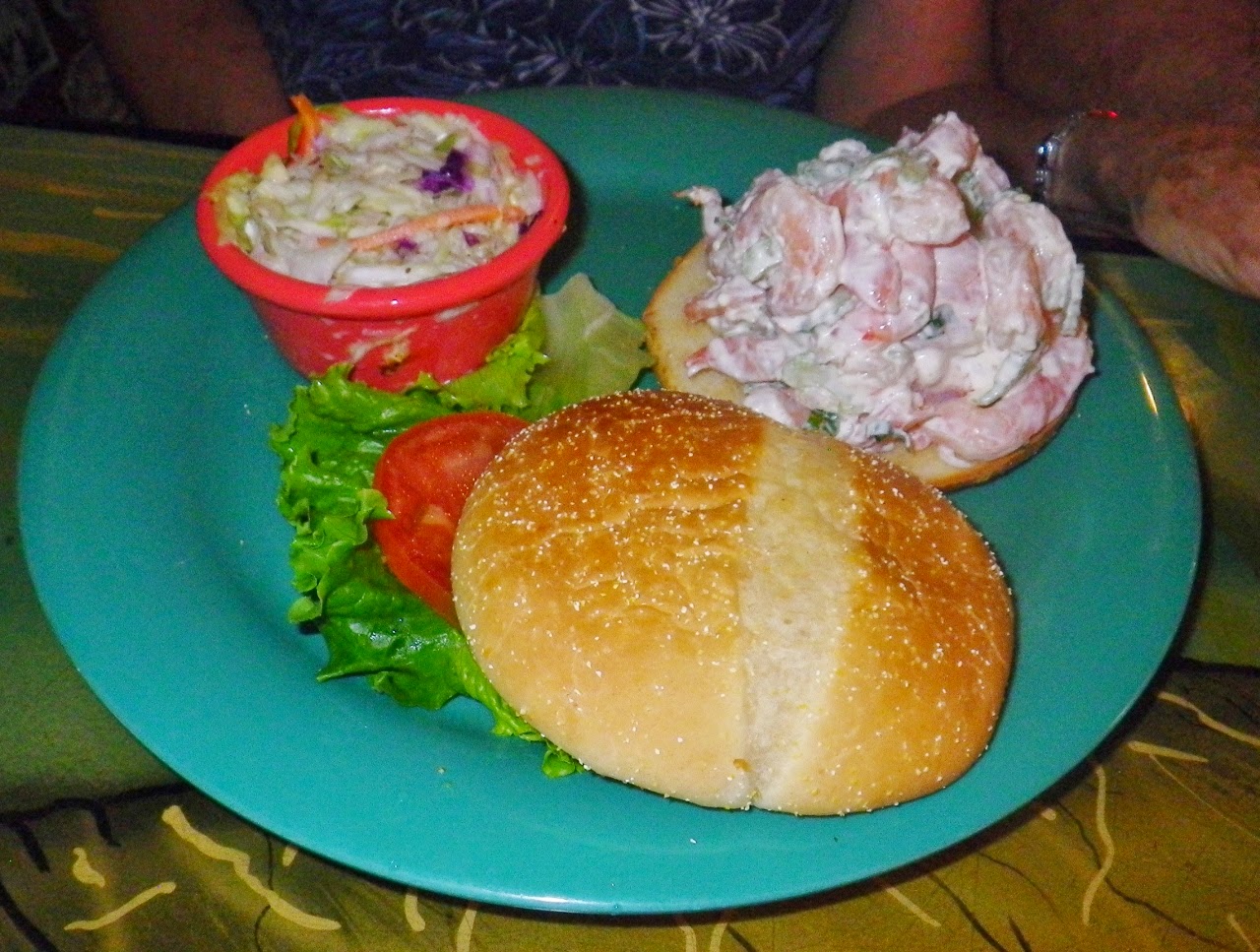 It is not surprising that with a name like PJ’s Oyster Bar and Sea Food Restaurant that the majority of the menu is seafood items. There are salads, chicken, beef and pasta selections to satisfy the “Land Lovers” as the menu says. Aunt Effie and Uncle Gilbert have been here several times and they have their favorites. Aunt Effie ordered the Shrimp Salad Sandwich ($6.99 All sandwiches served with French fries or slaw. No Substitutes.) The shrimp salad was piled high on her split-top sesame seed bun. It was accompanied with crisp, green lettuce and a slice of ripe tomato. The accompanying slaw was in a small serving dish on the plate. Effie said the slaw was very good, a little sweet, a little tart, not too wet and not too dry; just about right. She had no trouble finishing the sandwich. She used her fork to pare down the pile of salad before making the sandwich. She said it was good bur perhaps not as flavorful as she remembered but qualified that saying it may well be the little case of sniffles that was dulling her taste. Nonetheless, she did enjoy her meal.

My wife Janis ordered a Hamburger ($6.59 These burgers are for the true connoisseur and grilled to perfection All burgers are served with French fries or slaw, lettuce, tomato and onion on the side. No Substitutes.) True to the menu, she was asked how she wanted it cooked. She chose medium for a pink center and also chose French fries for her side dish. When the hamburger arrived it was served with crisp green lettuce, a slice of ripe tomato and a nice serving of crisp, golden brown French fries. Everything seemed to be in order save perhaps the center of the patty was a faintly pink, just a bit over cooked from the order. Other than that, the hamburger had good flavor as did the fries. It may have been slightly over cooked but there was none left to take home in a little bag for the hungry hounds. 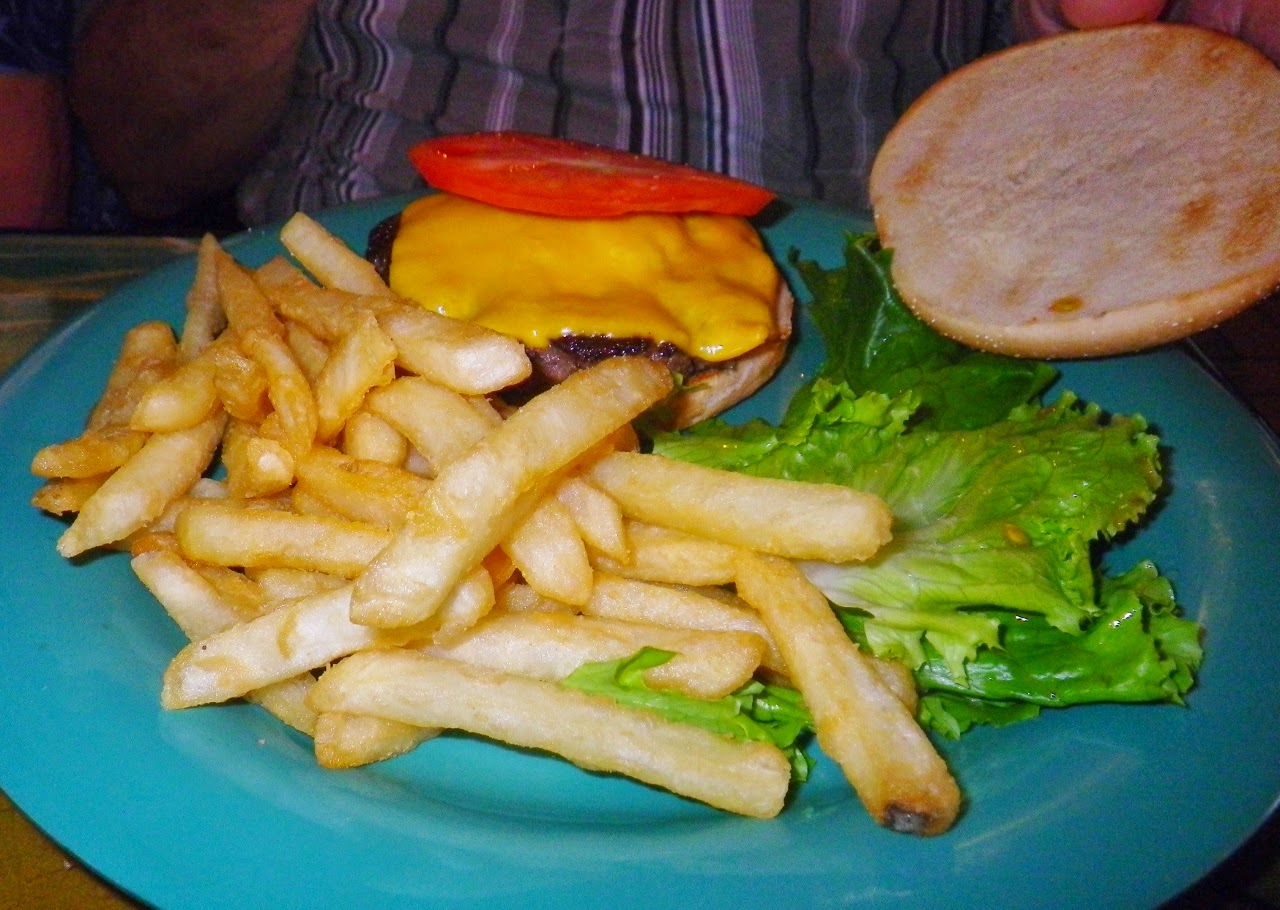 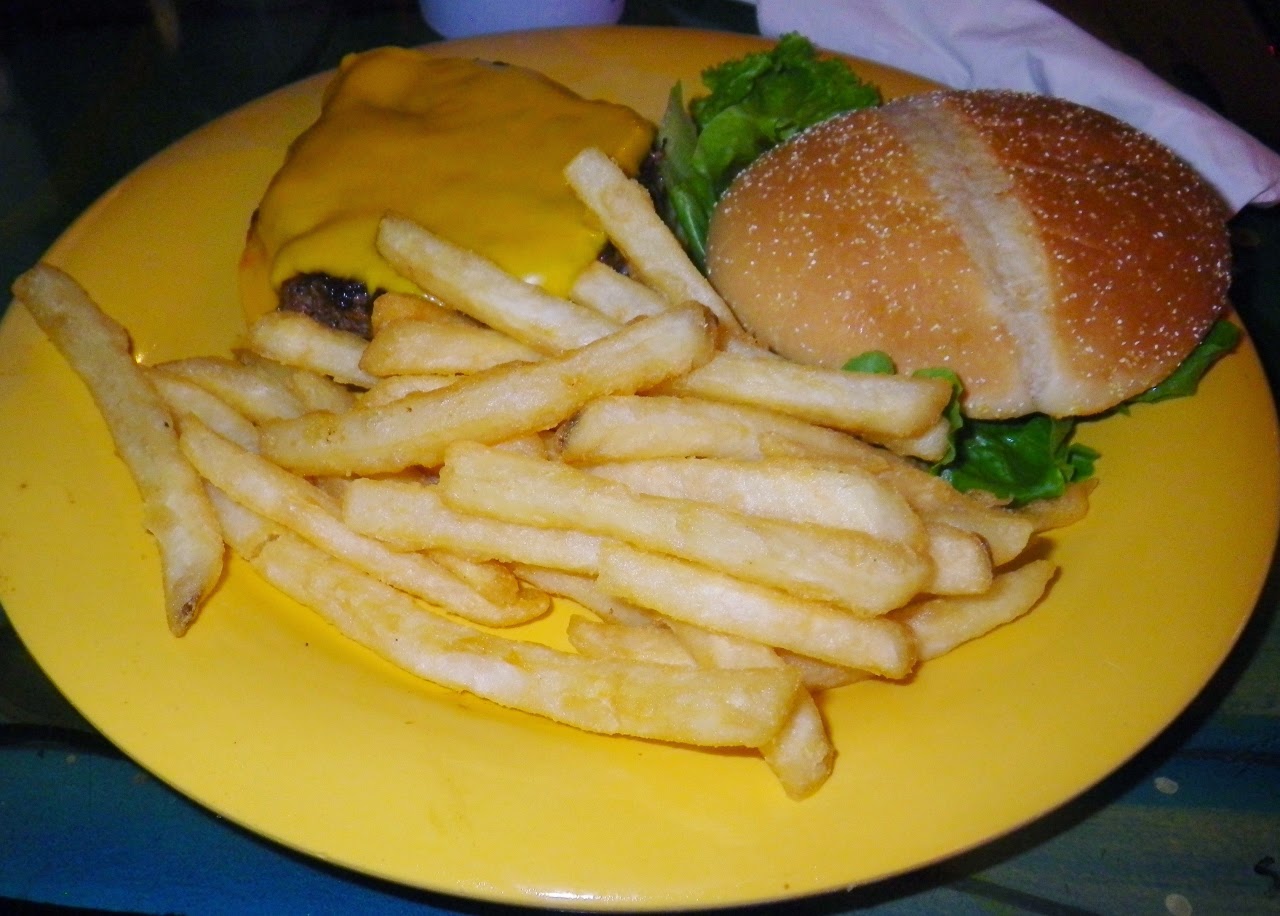 These burgers are in the style of the roadside diner of the Route 66 era; cooked on a large hot griddle, the buns toasting on the same griddle. Griddle cooked burgers have their distinctive taste. The cook was trying to cook to order but perhaps just a tad too long; on Gil’s well done order you can’t tell but my medium well was almost well done but not dry. Nevertheless, the about 1/3 pound patties were tasty, with a nice meaty flavor, the cheese nicely melted on top. The lettuce was crisp leaves of Romaine lettuce and the tomato was ripe, juicy and flavorful. We both enjoyed our cheeseburgers very much. Portions were adequate and we had a filling lunch.

The menu also says that the staff members are sometimes a bit “quirky” but dedicated… I’m not sure about the quirky part but the staff is busy doing the host thing and doing well at making you feel at home. The food is good as is the service. The karma certainly isn’t pretentious and one can feel right at home in just a few minutes. To that end it would appear that PJ’s has succeeded in their grand opening quest. When they move to the new facility across the street they may lose a bit of the charm that has accumulated over the years in their original building. I wouldn’t mind going back to see and enjoy another cheeseburger or be even more adventurous and order something else form the menu. I might just look a bit unto the future and see how things might be by visiting their newer sister location in St Pete Beach (595 Corey Avenue St. Pete Beach, Florida 33706 (727)3﻿67-3309). I think you will enjoy what they have to offer. 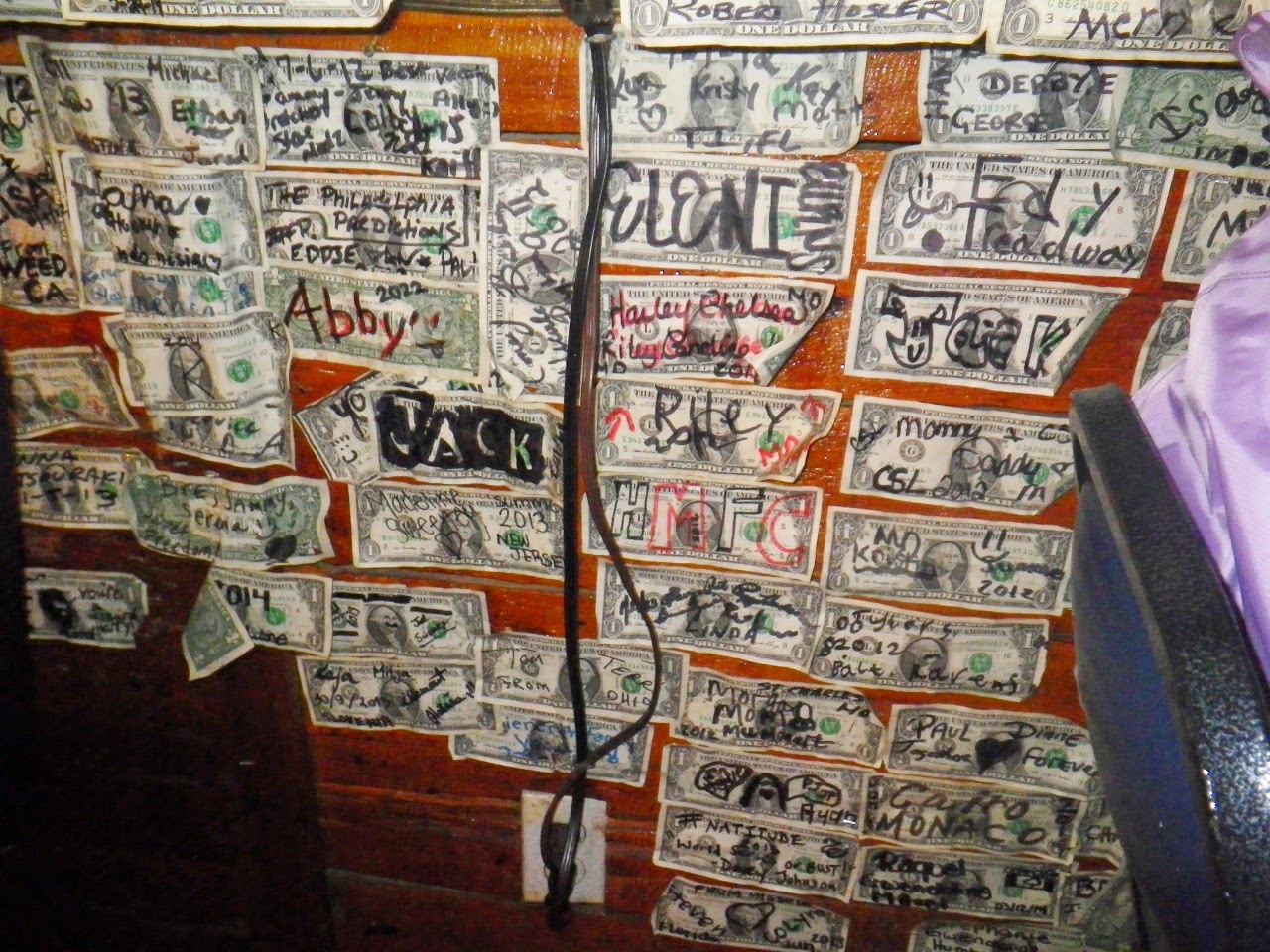 About the money on the walls; the menu explains thusly, “ Returning from their plundering escapades, pirates would come to shore to spend all their booty at local taverns on rum, wine, women, alcohol and food. Legend has it, in order for the tavern owners to insure that the tab would be paid, the pirates would mark their money and give it to the barmaids to hang up behind the bar. At the end of the night (sometimes even the weekend) the bartenders would simply take the money off the walls to pay the check.   Here at P.J,'s if your dollars come off the wall, they are donated to All Children's Hospital. Your server will provide you with a marker and staple gun to be a part of history and leave your mark... Happy Dining.”