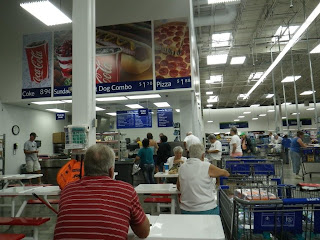 Some restaurants are posh, decorated and have an ambience of luxury. The food courts at Sam’s Clubs are a bit different. Almost as if an afterthought and in space available, they are usually placed next to the exit door and adjacent to the cash registers. The open warehouse architecture makes for high ambient noise levels, the nearby exit makes for perceptible drafts, and the high traffic density from the checkout counters makes for crowding and congestion. 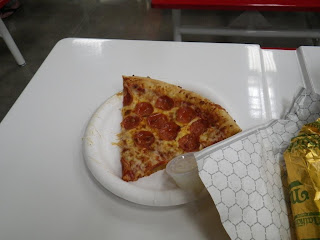 On the other hand, if you have favorites on the rather limited menu, it is a convenient place to get an inexpensive bite to eat after filling your basket with all the house-goods staples. As soon as you have the receipt in hand you shove the basket to an empty table to claim it as your own. If there are two of you it certainly is easier. One gets to guard the basket and table while the other goes and stands in line to order the food.
One of the wife’s favorite foods is pizza, pepperoni pizza to be specific. A slice of pepperoni pizza is $1.88. It is well covered in pepperoni slices. It is a crispy thin crust pizza. With all the pepperoni sausage on top, it is just a little greasy but all to the liking of a pizza lover. There is adequate cheese and the sauce has a nice flavor. It appears to be a 14- or 16-inch pizza and cut, I believe, into sixths, a generous portion. It was one of those overbearingly hot Florida summer days so to go along with her pizza, the wife ordered a 32-ounce ICEE, $1.08. 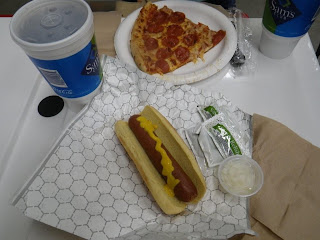 I chose the combination, a large hot dog and bun with a 32-ounce soft drink, $1.70. This Sam’s Club serves Nathans hot dogs which is a good thing. It is a large hot dog and a large bun to match. I have never seen the large Nathan’s hot dogs like that in the supermarkets. Also, in this store, adjacent to St. Petersburg, diced onions are available on request at the pick-up counter; they give you a nice little Solo cupful. Mustard is a pump dispenser on the condiment table and the relish is in those little tear open bags that I hate so much. If you are from New York, there are larger tear-open packages of sauerkraut if you desire. Soft drinks are Coca Cola products and the two machines feature most of the popular brands.
The kitchen and food service area always appears clean and well cared for. The dining area is basically clean but the majority of the table bussing is the patron’s responsibility and I am afraid some of my fellow diners are not really up to the task. 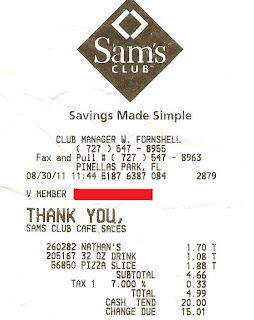 Although we didn’t partake on this day, one other menu item worth mentioning is their Four-Berry Sundae, $1.50. It is a large cup of soft-serve ice cream swirled with a chunky four-berry sauce. On really hot days it is really a life saver on the long trip over the hot asphalt paving to the car. More than once I have been on the verge of brain freeze.
All in all, it was a quick and simple meal that we both enjoyed. And after all, where can you take the wife for lunch and treat her to one of her favorite foods and have the bill come to less than five dollars? A pretty good deal after all. 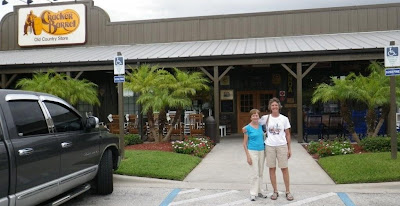 It had been quite awhile since our last visit to a Cracker Barrel. Although their Front Porch rewards program is now defunct, the e-mailing list persists. The latest offered the Country Brisket Plate special, slices barbecued brisket on Texas toast, French fries, a side of coleslaw and extra barbecue sauce and garnished with slices of sweet pickle; and all for just $5.99. Sounded like a good deal. We have had favorable outings at Cracker Barrel in the past. We owed out friend Martha a dinner out so we called and set a date.
This Cracker Barrel is the closest to our house, it just off the 275 Freeway on 54th Avenue in St. Petersburg, Florida, a leisurely 15 minute drive. We arrived in a lull, just before the dinner rush I would guess. We were seated almost immediately in a sparely occupied dining room. It was pleasantly much quieter than normal, the hard surfaces do echo ambient sound, and we were thankful for the small crowd and a much quieter dining experience.
Our server, Deborah, was quickly there to take our beverage order. She was friendly and efficient. During the course of the meal she was there to refill beverage glasses and to check on our progress. She was there often enough that we never needed to call for her but never hovered too near the table.
We had not told Martha about our predetermined choices. We wanted her to have free choice from the menu. Janis had already decided on the Chicken and Dumplings ($8.29) from the Country Dinner Platters section, her long time favorite from the Cracker Barrel offerings. She already had her side orders selected, corn, fried apples, cottage cheese and biscuits. Martha found the menu insert about the Country Brisket Special ($5.99), the offering that had brought me there, and in an example of coincidence, ordered the brisket. The brisket comes with a choice of biscuits or corn muffins. Martha was unable to decide when our server, Deborah, suggested that she could provide one of each for Martha to try and then the order was complete. 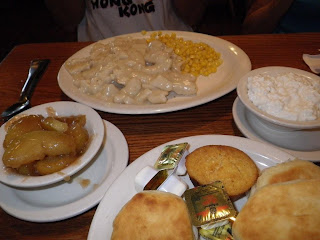 Janis’s chicken and dumplings were, as she said, “…as good as they always are.” She was thoroughly enjoying them. The serving was more than ample and as is her habit, asked for a take home container to split the meal and enjoy the second half as tomorrow night’s dinner.

Martha’s and my brisket plates were almost identical but only similar to the as advertized picture in the e-mail and stapled to the menu. The as advertized picture would lead one to believe a more substantial and better cooked serving was in the offing. Certainly it needed more work in presentation. Martha enjoyed her meal and had no particular complaints. The meat was slightly tough, more so than to cut with a fork, it needed a bit of pressure with the table knife. Perhaps the meat had been in a steam table dish too long. I think it was more of an oven roasted brisket rather than a true barbecued brisket. It was not big on flavor and therefore benefitted from the barbecue sauce. The sauce was vinegary Carolina style sauce, not to tart and not to thin, very good for that style of sauce. The base Texas toast was crispy as it should have 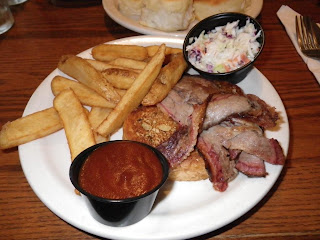 been. The fries were fine but needed a dash of salt. The coleslaw was tasty and just about the right serving for the size of the dinner platter. With the biscuits and butter, considering it was the “Special” at a reduced price, it all made for a satisfying meal of moderate proportions. There was one additional deficit we didn’t realize until the meal was completed. Our brisket platters did not have the sweet pickle slices. In retrospect I think the sweetness of the pickles would have made an excellent counterpoint to the tartness of the barbecue sauce and would have enhanced the enjoyment of a nearly marginal meal. My curiosity about this dish has been satisfied and I probably will not order it again in the future as there are too many other things on the menu I like better.
For the three of us, dinner and beverages, it came to $24.25, and with tip almost $30.00. At an bout $10.00 apiece, not too bad for an occasional dinner and night out with friends. If you like, you can compare the brisket meal I was served with the “as advertized” picture below. 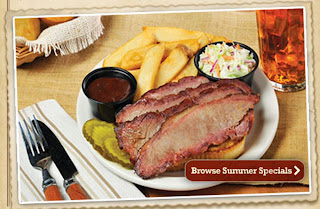